Daniel Mark Buechlein, OSB (April 20, 1938 – January 25, 2018) was a Benedictine monk and an American prelate of the Roman Catholic Church. He served as the third Bishop of Memphis from 1987 until he was appointed the fifth Archbishop of Indianapolis from July 14, 1992. Pope Benedict XVI accepted his early resignation because of health problems on September 21, 2011. 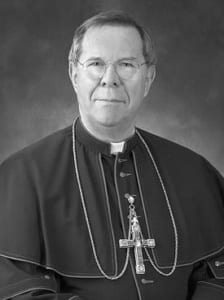 Daniel Buechlein was born in Jasper, Indiana, to Carl and Rose (née Blessinger) Buechlein, and made his solemn profession as a Benedictine monk on August 15, 1963. He was ordained to the priesthood on May 3, 1964, at St. Meinrad Archabbey. In August 1971 he was named President-Rector of the Saint Meinrad School of Theology. He assumed the post of President-Rector of Saint Meinrad College, in addition to his other duties, in 1982.

On January 20, 1987, Buechlein was appointed the third Bishop of Memphis, Tennessee, by Pope John Paul II. He received his episcopal consecration on the March 2, 1987 from Archbishop Thomas Cajetan Kelly, OP, with Archbishops James Stafford and Edward O’Meara serving as co-consecrators. Buechlein was installed as the Memphis ordinary on the same day.

He returned to Indiana upon being named the fifth Archbishop of Indianapolis on July 14, 1992; Buechlein was installed as such by Archbishop Agostino Cacciavillan on September 9, 1992. In 1995 he was appointed Co-moderator of the Disciples of Christ-Roman Catholic International Dialogue and as a consultor to the Congregation for the Clergy in the Roman Curia in 2003.

After his resignation, Archbishop Buechlein returned to the Benedictine monastic community at St. Meinrad Archabbey.

Archbishop Buechlein wrote a weekly column entitled Seeking the Face of the Lord for the official archdiocesan newspaper.