The Tribunal is an extension of the Bishop’s judicial governance of the Diocese of Memphis.  Though the bishop himself is the primary judge in the Diocese, he usually entrusts this part of his ministry to the Tribunal.  Our Tribunal is staffed and assisted by priests, deacons, and lay persons trained in canon law together with their support staff.  All tribunal procedures are carried out in accordance with the 1983 Code of Canon Law and relevant Instructions from the Holy See.

Though the Tribunal is competent in many legal matters, the primary work of our Tribunal pertains to matrimonial matters, especially declarations of nullity (annulments).  The ministry of the Tribunal is one part of the Church’s effort to offer healing and hope to those whose marriage has failed.  The Tribunal investigates these situations to determine whether, in certain instances, the parties may be free to remarry in the Catholic Church.

Faithful to Catholic doctrine, we maintain the innate dignity of marriage and the inviolability of the bond of marriage.  At the same time, we live in an imperfect society in which divorce is a common reality.  In accord with Canon Law, all previously married individuals (Catholic or not) have the right to seek clarification of the canonical status of their previous marriage(s).

By decree of the Apostolic Signatura, the Tribunal also serves as a Court of Second Instance (Appeal) for matrimonial cases from the Tribunal of the Dioceses of Nashville and Knoxville.

We hope that the following information will help you to become acquainted with our ministry on behalf of the Church.

Our beloved tribunal administrative assistant, Mrs. Nancy Hennessey, has decided to retire after 17 years of service to our Tribunal.  We had the joy of celebrating a party with her on December 16th to celebrate her 80th birthday and to wish her well in retirement.

All of us at the Tribunal will miss her greatly.  Her kindness and warmth were appreciated by everyone in the Tribunal and everyone at the Catholic Center.

May the Lord bless her abundantly for her service to the Church. 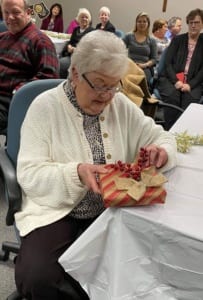 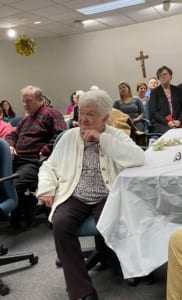 Which application should I complete?

For Lack of Form and Pauline Privilege applications, please go to the Chancellor page.

Completing and Submitting an Application

All Tribunal applications can be printed and completed by hand.  Please write legibly.  You may also complete an application online, if you have the necessary software.

After completing an application, take the printed application and any required documents to your parish or bring it to the Tribunal.

Please keep a photocopy of anything you bring or send to the Tribunal, since mail and documents can be lost.

If you need help with the application process, contact us at tribunal@cc.cdom.org or call (901) 373-1200 and ask for the Tribunal.

THE SACRAMENT OF MATRIMONY

337. What is the plan of God regarding man and woman?

God who is love and who created man and woman for love has called them to love. By creating man and woman he called them to an intimate communion of life and of love in marriage: “So that they are no longer two, but one flesh” (Matthew 19:6). God said to them in blessing “Be fruitful and multiply” (Genesis 1:28).

338. For what ends has God instituted Matrimony?

The marital union of man and woman, which is founded and endowed with its own proper laws by the Creator, is by its very nature ordered to the communion and good of the couple and to the generation and education of children. According to the original divine plan this conjugal union is indissoluble, as Jesus Christ affirmed: “What God has joined together, let no man put asunder” (Mark 10:9).

339. How does sin threaten marriage?

Because of original sin, which caused a rupture in the God-given communion between man and woman, the union of marriage is very often threatened by discord and infidelity. However, God in his infinite mercy gives to man and woman the grace to bring the union of their lives into accord with the original divine plan.

340. What does the Old Testament teach about marriage?

God helped his people above all through the teaching of the Law and the Prophets to deepen progressively their understanding of the unity and indissolubility of marriage. The nuptial covenant of God with Israel prepared for and prefigured the new covenant established by Jesus Christ the Son of God, with his spouse, the Church.

341. What new element did Christ give to Matrimony?

Christ not only restored the original order of matrimony but raised it to the dignity of a sacrament, giving spouses a special grace to live out their marriage as a symbol of Christ’s love for his bride the Church: “Husbands, love your wives as Christ loves the Church” (Ephesians 5:25).

Matrimony is not an obligation for everyone, especially since God calls some men and women to follow the Lord Jesus in a life of virginity or of celibacy for the sake of the Kingdom of Heaven. These renounce the great good of Matrimony to concentrate on the things of the Lord and seek to please him. They become a sign of the absolute supremacy of Christ’s love and of the ardent expectation of his glorious return.

343. How is the sacrament of Matrimony celebrated?

Since Matrimony establishes spouses in a public state of life in the Church, its liturgical celebration is public, taking place in the presence of a priest (or of a witness authorized by the Church) and other witnesses.

344. What is matrimonial consent?

Matrimonial consent is given when a man and a woman manifest the will to give themselves to each other irrevocably in order to live a covenant of faithful and fruitful love. Since consent constitutes Matrimony, it is indispensable and irreplaceable. For a valid marriage the consent must have as its object true Matrimony, and be a human act which is conscious and free and not determined by duress or coercion.

345. What is required when one of the spouses is not a Catholic?

A mixed marriage (between a Catholic and a baptized non-Catholic) needs for liceity the permission of ecclesiastical authority. In a case of disparity of cult (between a Catholic and a non-baptized person) a dispensation is required for validity. In both cases, it is essential that the spouses do not exclude the acceptance of the essential ends and properties of marriage. It is also necessary for the Catholic party to accept the obligation, of which the non-Catholic party has been advised, to persevere in the faith and to assure the baptism and Catholic education of their children.

346. What are the effects of the sacrament of Matrimony?

The sacrament of Matrimony establishes a perpetual and exclusive bond between the spouses. God himself seals the consent of the spouses. Therefore, a marriage which is ratified and consummated between baptized persons can never be dissolved. Furthermore, this sacrament bestows upon the spouses the grace necessary to attain holiness in their married life and to accept responsibly the gift of children and provide for their education.

347. What sins are gravely opposed to the sacrament of Matrimony?

Adultery and polygamy are opposed to the sacrament of matrimony because they contradict the equal dignity of man and woman and the unity and exclusivity of married love. Other sins include the deliberate refusal of one’s procreative potential which deprives conjugal love of the gift of children and divorce which goes against the indissolubility of marriage.

348. When does the Church allow the physical separation of spouses?

The Church permits the physical separation of spouses when for serious reasons their living together becomes practically impossible, even though there may be hope for their reconciliation. As long as one’s spouse lives, however, one is not free to contract a new union, except if the marriage be null and be declared so by ecclesiastical authority.

349. What is the attitude of the Church toward those people who are divorced and then remarried?

The Church, since she is faithful to her Lord, cannot recognize the union of people who are civilly divorced and remarried. “Whoever divorces his wife and marries another, commits adultery against her; and if she divorces her husband and marries another, she commits adultery” (Mark 10:11-12). The Church manifests an attentive solicitude toward such people and encourages them to a life of faith, prayer, works of charity and the Christian education of their children. However, they cannot receive sacramental absolution, take Holy Communion, or exercise certain ecclesial responsibilities as long as their situation, which objectively contravenes God’s law, persists.

350. Why is the Christian family called a domestic church?

The Christian family is called the domestic church because the family manifests and lives out the communal and familial nature of the Church as the family of God. Each family member, in accord with their own role, exercises the baptismal priesthood and contributes toward making the family a community of grace and of prayer, a school of human and Christian virtue and the place where the faith is first proclaimed to children.

From the Catechism of the Catholic Church

The Effects of the Sacrament of Matrimony

1638  “From a valid marriage arises a bond between the spouses which by its very nature is perpetual and exclusive; furthermore, in a Christian marriage the spouses are strengthened and, as it were, consecrated for the duties and the dignity of their state by a special sacrament.”

1639 The consent by which the spouses mutually give and receive one another is sealed by God himself.143 From their cove­nant arises “an institution, confirmed by the divine law, . . . even in the eyes of society.”144

The covenant between the spouses is integrated into God’s covenant with man: “Authentic married love is caught up into divine love.”145

1640 Thus the marriage bond has been established by God himself in such a way that a marriage concluded and consummated between baptized persons can never be dissolved. This bond, which results from the free human act of the spouses and their consummation of the marriage, is a reality, henceforth irrevocable, and gives rise to a covenant guaranteed by God’s fidelity. The Church does not have the power to contravene this disposition of divine wisdom.

Catechism of the Catholic Church

Code of Canons of the Eastern Churches (1990)