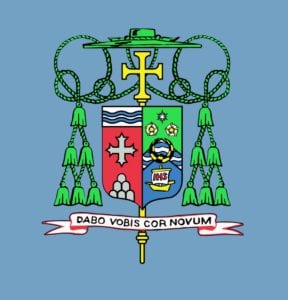 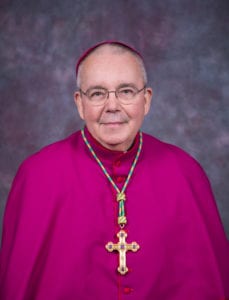 was installed as the Sixth Bishop of Memphis: Tuesday, April 2, 2019 “I know west Tennessee has a long-standing culture, and I want to know the culture of Memphis. I am here to listen and hear from our Catholic family and ask their opinion. God allows us to develop relationships and those relationships begin today.”

Talley Bishop David Prescott Talley was born on September 11, 1950, in Columbus, Georgia. He was raised as a Southern Baptist but converted to Catholicism while a student at Auburn University. He was received into the Catholic Church at the age of 24 at Saint Mary Church, Opelika, Alabama. Family members of Bishop Talley remain faithful Baptists, including a brother who is a deacon. Noting that his background gives him a broad view, he has said, “I do know faith across the spectrum.”

After his studies at Auburn, he obtained a master’s degree in social work from the University of Georgia and worked as a case worker in Fulton County, Georgia, to protect children from abuse. He studied for the priesthood at Saint Meinrad Seminary and School of Theology in Indiana and obtained a Master of Divinity degree in 1989.

Bishop Talley was ordained to the priesthood on June 3, 1989, at the Cathedral of Christ the King in Atlanta.

As a priest of the Archdiocese of Atlanta, Bishop Talley served as a parochial vicar, administrator, and pastor of a number of parishes. From 1993 to 1998, Bishop Talley studied at Pontifical Gregorian University in Rome, where he obtained a doctorate in canon law. Bishop Talley also served part-time in the archdiocesan Tribunal, as the Director of Vocations, and as Chancellor of the Archdiocese. In 2001, he was named a chaplain to His Holiness Saint John Paul II, with the tide of Monsignor.

One of his roles in the Atlanta Archdiocese was as chaplain to the disabilities ministry. He has said that his experience ministering among people with disabilities, which began at his first parish assignment, is key to his spiritual life. ”All they can do is ask the Lord for help. That simplicity and humility is where I think the church should be-humble before God,” he said in an interview in 2013.

On December 17, 2012, while serving as pastor of Saint Brigid Church in Johns Creek, Georgia, Pope Benedict XVI named Msgr. Talley an auxiliary bishop of the Archdiocese of Atlanta, and he was ordained to the episcopacy on April 2, 2013. His episcopal motto is Dabo vobis cor novum, “He will give you a new heart.” Bishop Talley also served as vicar general of the Archdiocese of Atlanta and Director of Priest Personnel, and was a member of the Council of Priests and the Committee for Ongoing Formation.

On March 5, 2019, it was announced that His Holiness Pope Francis had named Bishop Talley as the sixth Bishop of Memphis.