MEMPHIS, TN – The cathedral choir had a special surprise Sunday evening when a film crew from Brooklyn, NY interrupted their practice time. The television crew was present to get footage for a new series, titled, The Chair, which will tell the story of the Catholic Church in America.

As soon as cameras and gear were unpacked, the film crew from DeSales Media Group flew drones around the exterior of the cathedral capturing the architecture and grounds , while videographers filmed the interior highlighting its beauty and history.

Series host Monsignor Kieren Harrington, spent about an hour talking with Bishop Talley about his conversion to catholicism, his time as bishop and our community of Catholics. 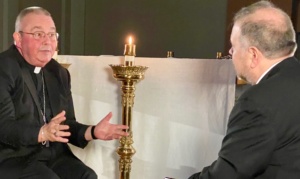 “In Catholic churches, there is a great deal of activity taking place because this is where the community gathers,” Monsignor Harrington said. “When you have something which is beautiful, it elevates the soul.”

The nature of the series is about how faith has grown historically in each diocese from the perspective of its shepherd. With Memphis being the fifty-seventh cathedral to be featured, each episode will be run first locally in the diocese where it was filmed; then it will move to both secular and Catholic media distribution over time.

Monsignor Harrington hopes it will reach Catholics who may have been away from the Church as well as non-Catholics who are interested in faith.

He also hopes practicing Catholics will watch and see something that makes them proud. Ultimately, the goal is to reach everybody.

The series will be in production for approximately another six months.