Memphis, TN — Faculty and staff fill the Cathedral of the Immaculate Conception.

The pews of Immaculate Conception almost overflowed with faculty and staff at the morning Mass on Monday, August 5.

Held during the first week of classes, the Mass is celebrated each year to mark the beginning of the academic year. This year, the Mass was moved from St. Francis of Assisi Catholic Church back to the Mother Church of our Diocese.

Father Robert Marshall, vicar general of the Diocese of Memphis and pastor of Cathedral of the Immaculate Conception, served as the main celebrant of the Mass and delivered the homily.

The Mass on Monday celebrated the Feast of the Dedication of the Basilica of St. Mary Major.  Built at the time of the Council of Ephesus, the basilica became a monument to the council and to their declaration that Mary is the Theotokos, the God-bearer or Mother of God.  Santa Maria Maggiore or Saint Mary Major is the largest church in the world (and possibly the first) dedicated to Mary.

In his homily, Father Marshall reminded the faculty and staff, “You are gathered in a Cathedral also dedicated to the Blessed Virgin Mary, decorated with images of Mary and of salvation history.”

The gospel of the Mass was John 19:25-27.  After noting some of the art work in the Cathedral, Father Marshall invited the congregation to look upon the scene depicted in the gospel, the four figures in the apse – our Crucified Lord, St. John on his left with his hands folded in prayer, St. Mary Magdalene kneeling in grief at the foot of the cross, and our Blessed Mother with her arm extended, pointing to her Son. 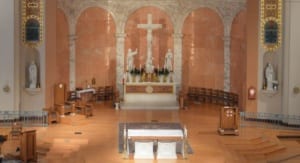 Father Marshall continued “Mary is always pointing us to her Son.  In her great canticle, she told us that her soul proclaims the greatness of God, her soul magnifies the Lord.  At the wedding feast of Cana, Mary directed the waiters to Jesus, telling them, “Do whatever he tells you.”  In every way, Mary points us, guides us, introduces us to her Son, Jesus.  Mary, therefore, is the model of Catholic education.”

“Like Mary, as Catholic educators we too are called to point our students to Jesus Christ, to introduce them to Jesus, to guide and direct them in the way of discipleship.  We are to imitate Mary in our focus upon her Son.

Schools are measured academically by test scores, measured by their up-to-date technology, by the quality of their facilities, by the success of their sports programs – and we want our students to excel academically, to be ready to face the technology of the world, to be formed in body, mind and spirit.

But the most important thing that a Catholic school does is to point our students toward Jesus Christ, toward eternal salvation.

So when we wonder how we will explain a difficult concept to our students, we should do what the Council of Ephesus did – we turn to Mary.

Jesus himself encouraged us to look to Mary – “Behold, your mother,” he said to us from the cross.”

As the Mass came to an end, the teachers and school administrators in attendance received a special blessing that God would guide them in the coming year and again reminded them of the identity and mission of Catholic education.